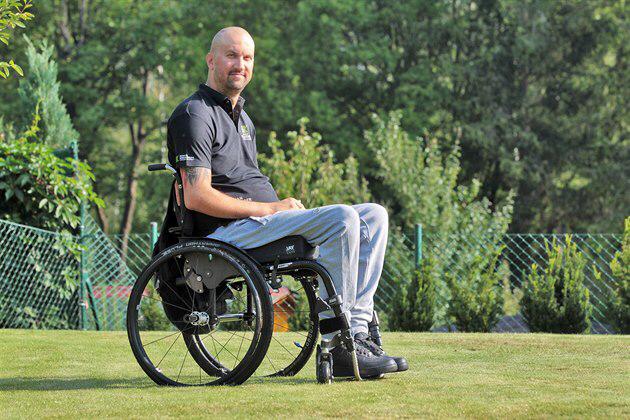 Pavel Kovář: Finally, something like this arose in the Czech Republic!

He is the captain of the Cajovnickove team and is also unique. He spent a long time playing basketball, the "alive" one. He tried the youth league for Sokolov and then the second men's league. It was his life, and he wanted to get at least into the elite Czech league. But then he was very unlucky and was seriously injured in a wheelchair at the age of 24. For a while, the active player became a fan and a spectator. About two years ago, however, he discovered the world of the NBA 2K, which allowed him to return to his beloved sport in a more active role. And last year, Pavel Kovář got the chance to join the historically first Czech national team in e-basketball, which participated in the worldwide Esports Open tournament under the International Basketball Federation FIBA. However, playing Pavel's online NBA 2K does not end his sporting activities. He has been racing on a handbike for six years, the third year at the highest, representative level. His dream is to qualify for the 2024 Paralympics. However, his immediate goal is to succeed at the eBasketball Open with the Cajovnickove Team, scattered throughout the Czech Republic, Silesia, Slovakia, and Austria. However, their shared passion for the game world unites them with a strong bond.

Pavel, how did your squad enjoy the upcoming tournament?

Given that several of my teammates were members of the first Czech sports team in basketball, we welcome this news in a big way. We have also played some tournaments on the European scene. For this opportunity, we are thrilled that a more permanent gaming environment will finally be created in the Czech Republic, and a match will take place that is subsidized by luxury prize money. That is not even normal in Europe, I think. That is why we are thrilled to be able to take part.

Are you going to the tournament conscientiously?

We have been operating essentially non-stop since the national team last December, we have not stopped playing or coaching, so I hope that we are ready, and perhaps the tournament will test us a bit.

What have you been up to since December?

We mainly played two seasons of one Balkan league. We were supposed to enter another European competition, but there was a problem because of the covid. And then we learned about the eBasketball Open, which we are looking forward to.

Were competitions organized in the Balkans already close to the level of national teams?

There were also worse teams, but otherwise, the quality was relatively high, and we also met some players who play in the national teams. So the quality was quite enjoyable. The first four or five teams were very decent.

Were there any cash prizes involved?

There was no money in these Balkan leagues, but there would be some prize money in a tournament that didn't take place in the end. But not like they will be at the eBasketball Open now, where there are incredible rewards.

Which event did you do the most?

The main thing was that we didn't get on our nerves because we have good relationships, and I appreciate that the most. And now we would like to "kick" it, as a result, firstly concerning the upcoming Open and subsequent European events, which is our goal.

I'm the captain of the Cajovnickove Team, and I'm on the wing, like a shooter. Honza Balko from last year's rep team is at the start, and Vláďa Svojanovský is on the second wing, who was also in the first line-up of the national team. Under the basket on the power forward, we have a colleague from Slovakia Denis Kostial. On the wing is also Adam Vrabec and Maroš Kasperkevič, the Slovak volleyball league champion with Komárno. So there are six of us.

And what do you say about the involvement of the Olympian from Tokyo Ondra Balvín in the whole event? Will what's happening around NBA 2K help?

In my opinion, for sure. He is a big star of Czech basketball, and if someone like that shows other people that he will play this game, it will only be for the benefit of the cause. He is a European star, and I would not be afraid to say a global format. I am grateful that he decided to support it.